We’ve been getting ready to leave Rovinj.  R, in a burst of nostalgia for our first week took us on a bicycle route five miles around the city to get to a place that is ten minutes away.  But once there (traffic dangers and gravel roads aside) we found olive groves and vineyards, abandoned churches from the 11th century, wobbly big bumble bees looking for spring flowers and the loveliest quiet.  Well worth the trip.

I know it must seem as if we’ve been on vacation all along but we have been living frugally. Mostly eating at home, being careful about the day to day expenses.  And since it seemed we had both lost our concentration a bit after The Border Affair we decided to be tourists for this last week.  We took a ferry ride around the islands getting to see Rovinj from a different perspective.  No matter which way you look at it  – its a beautiful place. 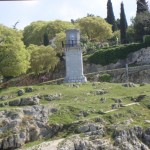 A lighthouse that we could only see from the ferry

There’s been a Red Bull Fly In going on since yesterday afternoon.  The air is filled with the buzzing sounds of small planes.  The wharf now has food carts strung along its edge and all of the restaurants on the square are open; waiters standing at the ready, encouraging people to step in for lunch, dinner, dessert, coffee – you get the picture.  There were supposed to be 80,000 – 100,000 people here for the event – hotel rooms filled, streets packed.  There’s a band stand set up on the square.  We’ve promised ourselves to take a walk down tonight and see what’s up though we could just faintly hear it from the new apartment on Centener.

The rocky shore – though the sea has been mostly calm.

We’ve worked out how to get to Germany from here – with a two day stop in Ljbijana followed by a train ride to Ravensburg.  I’m looking forward to the trip and to a little more ease with the language.  I’m afraid the only Croatian I’ve managed are the very basic of basics, rather like a two year old.  Dog, good, bad, please, thank you, a continental shrug of the shoulders which means I don’t understand and lastly, a fairly good imitation of an owl like bird called a Cuk. 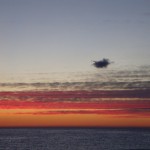 One of many beautiful sunsets