We went to Zagreb by bus on Saturday morning to pick Michelle up at the airport.  We bought our tickets the day before – in keeping with my style of over management.  The bus route took us 30 kilometers south to Pula in order to get us 300 kilometers north to Zagreb. Unknown to us seats were assigned when  we bought our tickets which had little bearing on our fairly empty ride from Rovinj to Pula but in Pula, where the bus appeared to be sold out there was lots of discussion, seat shifting, and some finger waving by the conductor – who had a mild resemblance to a certain white rabbit with a concern over lateness.  The assigned seating appeared as much a surprise to the Croats as it did to us.

Zagreb was packed.  The bus station teemed with people carrying packages, roll along bags, children.  When we checked into ZigZag apartments, Anja, a lovely young woman who reminded me of my niece, Katherine, warned us that parking would be a challenge because of the holiday crowds.  Intrepid as we are we thought we could handle that.

Properly attired we waited for Michelle by the gate. 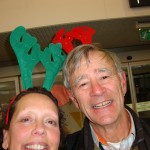 And off we go in our little orange rental car.  Two navigators, a driver, a map and lots of directing.  So, parking.  Yes, it was a problem.  An hour after we got into Zagreb from the airport we were still circling the downtown looking for a place.  We began creatively thinking of alternatives.  Valeting the car in a hotel parking lot – leaving it with the keys in it and saying it was stolen.  Finally we find a spot, park, get out and are descended upon by  taxi drivers talking loud and fast.  Apparently we were parked in a taxi stand.  Back into the car – the circling begins again.  We found another spot in front of a very official looking building and park the car.  A taxi driver shouts at us as he drives by – I’m guessing he wasn’t saying “way to go” about finding a space.  The three of us are trying to figure out if the signs say we’ll get towed, jailed or shot if we park there – the punishment determining whether we’d risk it.  While all of this is going on a car pulls up, a nicely dressed man gets out, removes the saw horse that is blocking a space a few away from ours, pulls in, and seeing us looking confused, says, “It’s okay.  Stay there.” And waves us off.  We get the luggage and make a fast get away – but look back as we are walking and see that he is looking at our license plate as he talks into his cell phone.

We had a great dinner at a restaurant called Agava.  Traveling in the off season has its benefits.  We had our choice of tables, the meal was leisurely and our waiter took time to choose our dishes and the wines to go with them.  Truly a lovely meal.  We had all intentions of walking back to make sure the car was alright but somehow, 5 kinds of wine and a taste of grappa later we thought we’d take our chances. 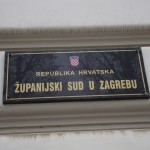 Turns out we’d parked in front of the courthouse and who ever it was that called must have said don’t ticket or tow this car, because when we got back in the morning we were the only car left and no ticket.  Who ever you are – thank you!

Sunday night we wound up sitting on the plaza and listening to the Rovinj choir while eating a delicious soup and drinking mulled wine.  Outside.  On the evening of December 22.  Listen to the choir, apparently they are award winners and you can hear why.  We had a great time – though maybe a bit more mulled wine than is actually good for me.

I’ve found myself feeling a bit more teary than usual this last week.  I think I miss the chance to see and connect with friends during this time.  I hope all of you are happy, healthy and enjoying time with family and friends. Merry Christmas to all of you!