Sunday morning, while I began the process of cleaning the apartment for visitors next week, R went out for our morning brioche.  He came back shortly, breathless and said, “They’re making a movie on the square – get dressed and come see.”  Now, in quiet off season Rovinj this is something not to be missed.  I squashed a hat onto my bed head, threw on a pair of pants, grabbed my sunglasses (yes I really did need them) and walked over to the square.

Indeed, there was some kind of movie making being done – complete with catering truck, equipment trucks, about ten tables removed from our favorite cafe thus explaining a rise in that particular real estate value, hair and make up, a couple of assistant directors, talent and oh! oh! oh! best of all – a flock of ducks with their very own herder.

The guy in the brown pants is the talent, the guy with the stick and the sports jacket – he’s the herder.  The ducks … well they’re the ducks.  The talent was supposed to walk into the hotel, the ducks were supposed to follow.  The herder very gently tapped behind them to get them all (please forgive me)in a row.  The ducks did as they were told until they reached the red carpet.  At that point they turned as one, making as if to flee the whole mess by way of the Adriatic.   The herder of course stopped them.  The director yelled cut, we ate our brioche and it all began again.  And again.  And again.  Somehow this so delighted me. The square is often busy if the sun is out.  But this was like a festival.  And most of the interest was in the ducks!

My fingers were crossed in the hope that  the whole troupe  (including ducks) would stay over night and continue filming the next day but we found out that they were moving on that evening to a ski town, where they would continue to film.  Sans ducks.  But with an alligator.  I’m hoping that they sent the ducks home … away from the alligator.

The last walk of the evening led us up to St. Eufemia, the church at the top of the hill.  This was our sunset last night.  And our nearly full moon rise. 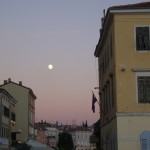 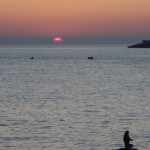