I’m thinking about downsizing – again.  We’ve done it a lot over the last ten years and I had begun to think that there wasn’t much more I could get rid of, but I was wrong.  There are pockets of things that still have meaning, still hold some value despite not having been worn, used, read or looked at in a while.  As we think about living overseas I realize that much of what’s left will have to be stored, maybe distributed among friends who have a use for it or some spare space in their basements.  Though if I do too much of that I suppose it’s the same as getting rid of it all.  I wonder if I’ll feel set adrift without the last bits of crystal glassware, scarves; jewelry from my mother that I really never wear. 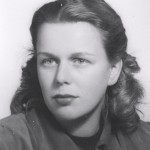 The jewelry is easy.  When my mom gave me my first real piece of jewelry she told me that a woman’s jewelry was hers to do with it what she wants.  Put a down payment on a house, take a trip, turn it into cash and run away from home, it was up to the owner.  Her telling me that always allowed me to feel a little richer than my purse actually said I was.  And she continued to give me jewelry as gifts.  I still wear the earrings she has on in this photo.  It’s a way of keeping her with me – keeping her as she was when I was young.