We went to the Hygiene-Museum on Friday afternoon.  It’s an enormous  nondescript building next to the Dresden Zoo (that’s next week).  We were going back and forth about visiting this museum because we couldn’t quite figure out what the content would be given its name.  And I, in my grey way, had visions of hygiene and its historical application to vast numbers in WW II, so if you’re willing to walk a mile in my socks or a meter in my socks you get the picture.

Anyway, we took the plunge and it was wonderful.  We spent close to two hours there which is one hour longer than our limit tends to be in museums.  They have an exhibit up called Dance! moves that move us.  It’s an historical look at dance, beginning with the innovations of Nijinski stepping right into b-boying ( a new name though not a new form to me). 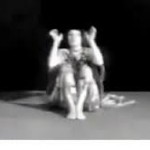 performing Hexatanz  a significant piece in dance history as well as  contemporary interactive exhibits like wi and sound producing wobble and jump boards that can be used to create musical scores.  Along one wall  a series of monitors  were set up with headphones showing clips from various dance movies beginning with a Fred Astaire film and ending with Billy Elliot.

One of the films was Michael Jackson’s  The Way You Make Me Feel video issued in December 1987.  (www.youtube.com/watch?v=aK_7RwjC5r8) I don’t really remember it from the year it was released, I probably wasn’t watching MTV very much but seeing it in 20014 – the way it made me feel was uncomfortable.  The violence, the implied threat of the situation and the movement, Jackson’s pugnacious jaw and strong pelvic thrusts while singing about the way SHE makes him feel … yikes.  The fact that the woman he is chasing is so similar in body type as Jackson himself just lays down another level of creepiness.  While R and I had a glass of wine in the cafe on the first floor he expressed the same reaction which surprised me.  He said he couldn’t watch it.  I’m interested in what people had to say back in 1987 – if there was any discussion about the content then – and interested too, in people’s current reaction to the clip.  Take a look at it.  Let me know what you think.