We’ve been in Dresden for a week. 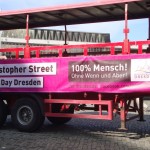 We started out at 7:45 last Friday morning and arrived about 8 hours later after missing our first connection (even Germany has scheduling problems) and making 4 changes to catch up with our original train.  Though it was long it was still fun.  Dresden was celebrating when we got here.  Crowded, festive.  The change of heart that is now Germany – inclusion, tolerance, acceptance was apparent. 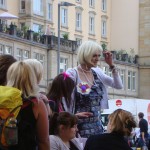 This femme fatale had a dress made of condom packets, 8″ white pleather boots and as you can see a demure cardigan with pearls. She took pictures with a bachelorette party that passed through. The bride to be wearing a tray around her neck and carrying a sign offering a blow for a euro.  The tray held balloons.  Yes, that’s the blow. 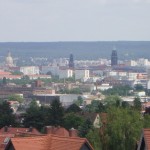 This is the view from our apartment window.  We’re feeling rich because we’ve got three rooms on the top floor and there always seems to be a breeze passing through.  I’m relieved that we are in a city.  While Illmensee was lovely we were held hostage by the limited transportation system.  Here we’ve already bought our monthly passes and have used them daily.  There are busses every 20 minutes or so on into the night which means we are free to go in and out of the city, explore, ride to the end of tram lines – turn around and come back or stop and explore any neighborhood or cafe that looks interesting.  You can see the Frauenkirche to the left.

This fountain is in Plauen, just a few stops down from our apartment.  I like the creatures perched on the rim.  They hang all around the edge spurting water.  When we there a pigeon was taking a very careful bath beneath the water, lifting first one wing then the other, shaking himself off, then repeating the whole dance. 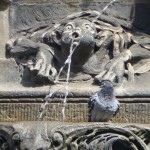