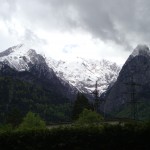 The Zugspitze or a sister mountain

Garmisch-Partenkirchen sits at the base of Germany’s highest mountain, the Zugspitze.  It feels as if you’re being held in a wide bottomed bowl as you look up at the massive peaks above your head.  My brother was born here some 63 (or so) years ago.  Garmisch for me, has the air of a folk tale.  My mother talked of skating here, having coffee on Marienplatz, of giving birth to my 13 pound brother.  I have some photographs of them shortly after he was born – he looks like a one year old. 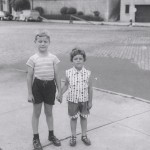 My brother and me in N.Y.

Some of the facts of our lives have always felt shrouded in mist, much as the peak of the Zugspitze. I know it’s there but I can’t quite see it.  It is a mystery conjured by my mother who more often than not felt that children should be seen (nicely dressed) and not heard and that one should eat everything not know everything.  Though as I got a little older she would tell me stories about herself when she was younger.  They were tinged with not nostalgia so much as a sense that there was a life lived before and one after.  Somewhere inside me there was always a hope that my mother would decide to move back to Europe – I of course would go with her and fulfill my destiny to be exotic and live “abroad”. 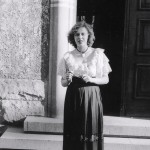 I have no doubt that that idea was mine and mine alone.  My mother took great pride in her Americaness.  When someone would ask her, because of her accent – a life long difficulty with th’s, w’s and f’s what nationality she was, she’d fix them with a very blue eye and say, “American”.  She was proud too, of the fact that I was born in the states, though I lied for many years and said Paris was my birthplace.  We spoke English at home until I took French and German in school and only then did we institute one day a week foreign language use.  I could bring her to tears speaking French with a pretended southern accent.

There is another reason I wanted to go to Garmisch.  I’ve had trouble sleeping most of my adult life.  Some years ago on one of those frustrating and painful nights, in a fit of restless insomnia I whined to Robert to tell me a story.  Early on we had discovered that his voice could lull me to sleep but if he read he’d needed a light which would add to my insomnia.  Thus only a story, told in the dark in a soothing voice would do.  He began weaving together a series of stories about a little girl in Garmisch-Partenkirchen, her family, a very special dog and world events that became a creative cycle that took on a life of its own.

Putting my feet on the cobblestones of Garmisch, looking at views and landscapes, store fronts and pubs that had been woven into the stories is like my dream of Disneyland.   We’ve continued to tell the stories back and forth, suggesting details, correcting misconceptions that one of the other of us has formed.  It’s an ongoing creative project that darts and weaves throughout our lives.  That it has some relationship to my own life in actuality makes it all the sweeter.