It’s like mushrooms are growing around here.  Every morning we take inventory of how many cafes, restaurants or gellato stands have opened since the day before.  First the chairs and tables appear then the umbrellas, followed soon by people occupying the seats.  The streets are more crowded and we now have to order our rotisserie chicken the day before – a fair inconvenience to us but you know, The Season.

The Season is getting a kick start this year from what I understand.  On April 12th and 13th there’s going to be a Red Bull fly in.  One hundred thousand people are expected. Cafe owners, landlords, shop keepers are all working frantically to bring their places up to snuff a month earlier than normal.  We offered to move to another apartment that is outside of old town so that our landlord can rent this one for that weekend.  It isn’t only altruism that motivates us.  It’s going to be noisy down here.  And crowded.  And oh, did I mention noisy?  So when we get back from Lubijana on Monday we will throw our stuff into the rental car and haul it up the hill.

We’ve heard some practice planes flying the course already.  They sound like big angry bees.  Big bees.  If one were the nervous type one might expect nasty things to fall from their insides if one didn’t know better.  I’m trying not to graphically imagine people flying these little bombers after a couple of cans of Red Bull.  I’m hoping to view the race from a bit further away than the ideal.

We are beginning to make plans for Germany.  We really have chosen to be in the back of beyond so leaving here requires either two bus rides and a train ride to Munich followed by another trade ride to Ravensbug, or a bus ride to Slovenia followed by another bus ride, a train ride and then, well you get the picture.  But the back of beyond is a lovely place to be … once  you’re there 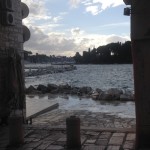 right outside our front door